We've recently encountered AD environments where getting an initial domain account through classic poisoning methods was made difficult because of different hardenings or configurations:

Fortunately (for pentesters), LDAP signing and LDAPS channel binding still seem to not be deployed as often as they should be, leaving the whole attack surface offered by the LDAP service in order to obtain this first domain account.

This article will present 3 “new” LDAP relays implemented in Impacket's ntlmrelayx.py tool, “new” in quotation marks because none of the techniques presented here are new, all are based on the work of other researchers who found the techniques/vulnerabilities, but a domain account was needed to exploit them. The "new" part is their implementation in the context of an LDAP relay so that they're exploitable from a black box situation without an account, with the ultimate goal of making it easier for the pentester to obtain the first domain account in a hardened environment.

The following paragraphs assume a successful relay of a domain account authentication to the LDAP/S service of a domain controller, for instance by relaying authentications through HTTP obtained after poisoning the WPAD name using multicast name resolution protocols, or DHCPv4/6.

TL;DR: This relay gets the domain's ADCS configuration through LDAP (enrollment services and certificate templates, and their access rights), to be able to know without a domain account the server and templates to target for an ADCS relay.

As it is now well-known, Lee Christensen and Will Schroeder from SpecterOps discovered in their excellent research on Active Directory Certificate Services, among numerous other things, that web certificate enrollment services are vulnerable to NTLM relay in their default configuration, allowing an attacker to request certificates authenticating users or machines they relayed and takeover their accounts. An Impacket PR was quickly developped and is still now an extremely effective domain escalation vector in environments which have not corrected this issue.

However, from a black box perspective, the main challenge is finding the web enrollment services to target. Various techniques exist (checking usual suspects like DCs, looking for hints in hostnames after a reverse DNS enumeration, checking information in TLS certificates presented by the domain's TLS services) but they are not foolproof and could fail.

Enumerating the ADCS configuration can be done through LDAP, under the CN=Public Key Services,CN=Services entry of the configuration naming context, and as such can be queried after successful authentication. The SpecterOps whitepaper already explains the interesting LDAP objects and attributes perfectly so I will not repeat it here, but the TL;DR for our purposes is that we can extract from LDAP a list of servers hosting enrollment services, the certificate templates they offer, and their associated enrollment privileges.

The LDAP relay added by this PR first lists existing enrollment services, the templates they offer, and the principals allowed to enroll on them. Then for each template which allows for authentication and does not require manager approval, it additionally lists their respective enrollment rights. This results in an output as such:

After a successful LDAP relay, we now know that an enrollment service exists on host dc1.domain.local, on which any authenticated user can request certificates. We also learn from the extracted templates that users and machines can enroll on the User and Machine templates respectively.

Note that additional enrollment restrictions that are not output by this relay might be set up on templates, such as the need for a valid DNS hostname in the certificate, which a domain user cannot fulfill.

A test on http(s)://dc1.domain.local/certsrv/ can then be made to check if a web enrollment service actually exists - by seeing if a simple GET request results in a 401 response code - and, if it does, we have all we need for ADCS relay and can configure it appropriately. The next user or machine authenticating to the relay server will hopefully give us a certificate we can use for account takeover (as long as Extended Protection for Authentication is not configured on HTTPS, or no additional restriction exists on the template).

This PR has already been merged (thanks 0xdeaddood!) and is now available in Impacket's main branch as the --dump-adcs option to ntlmrelayx. Additionally, in the default situation where User and Machine templates are available, the ADCS relay attack will now automatically select the correct template according to the relayed account, so that certificates for users and computers can be requested in the same relay.

TL;DR: This relay exploits a vulnerable LDAP schema object installed by Exchange to add a computer account even if the domain has been configured to prevent non-privileged users from adding machines.

Adding a computer account to the domain after an LDAPS relay is a common technique to obtain a first domain account, exploiting the fact that by default non-privileged users and machines can perform this action. A domain can and should be hardened to prevent non-privileged accounts from adding machine accounts. Two domain settings can be tweaked for this:

In July 2021 James Forshaw from Google Project Zero opened up a vulnerability report that ended up becoming CVE-2021-34470, about an LDAP object added by Exchange during installation. Here again the issue is well detailed, so the TL;DR is that a computer account can create an msExchStorageGroup object under itself, under which it is then possible to create numerous types of additional objects, including computer accounts.

A patch for this issue was released in late June 2021 in the form of an Exchange cumulative update. However, for organizations which have not patched their Exchange infrastructure (though they admittedly have bigger problems), or which have decommissioned it and as such could not install this patch, this vulnerable object still remains in the LDAP schema and can be exploited. Note: PingCastle reports this under “Presence of vulnerable schema class” - we actually got inspired to investigate exploitation avenues after seeing it in multiple PingCastle reports.

The vulnerable object in an LDAP schema is below. Note the possSuperiors attribute set to computer and subClassOf set to container: 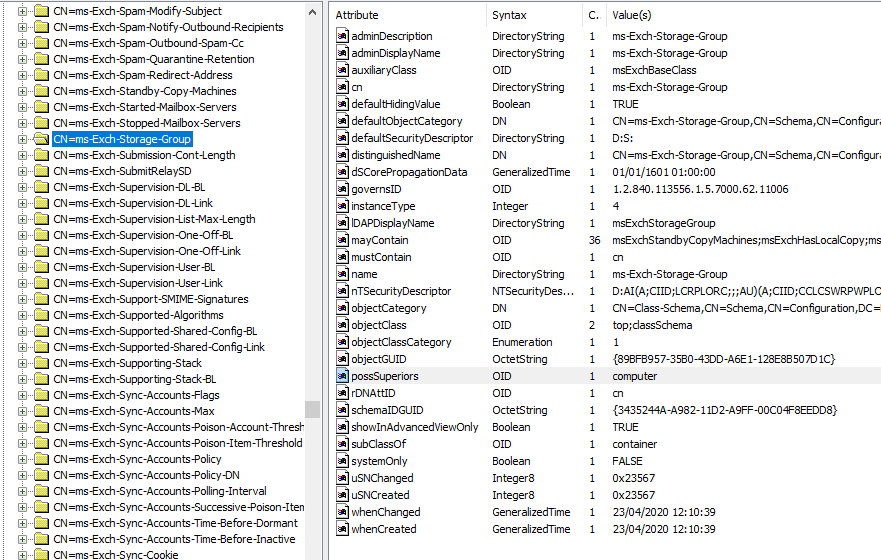 Moreover, it turns out that creating a computer account this way bypasses both machine account creation restrictions and allows a non-privileged account to do this. So, exploiting this issue during an LDAPS relay of any domain account in a vulnerable environment allows creating a machine account, even though the domain has been hardened to prevent this attack.

This PR modifies the existing --add-computer relay to do just that. If adding a computer using the traditional method fails because of these restrictions, ntlmrelayx will try to fall back on this method and exploit this vulnerability. Multiple requiremets have to be met:

The relay will add an msExchStorageGroup object under the relayed computer object, and then add a new computer under this new object. It first checks if the object exists in the schema and if it's still vulnerable. The output is the following:

This new computer grants a first account in the domain:

Interestingly, these new objects cannot be found by browsing the Active Directory Users and Computers MMC (though they can be searched):

They can however be found using an LDAP client such as ADExplorer or ADSIEdit:

Note that as James mentioned, creating arbitrary LDAP objects could have bigger impacts within the domain, but I am not aware of further research regarding this.

TL;DR: This relay adds records to DNS through LDAP to poison hosts outside the local subnet and obtain more authentications. The WPAD and wildcard records are the most effective but could cause disruptions on the network.

Throughout 2018, Kevin Robertson from NetSPI released a series of detailed articles about ADIDNS. Some of the takeaways were that authenticated users can add non already existing DNS records to the domain through LDAP. Interesting names to add are the names other machines are trying to resolve in multicast, as well as the wildcard (*) and wpad records, as adding these will cause domain computers to authenticate to the attacker's machine in different situations. The advantage is that unlike with classic poisoning techniques, this will allow us to reach machines outside of our local subnet.

Note: Kevin's own Inveigh does exactly that, so be sure to check out this project!

This PR implements this attack in an LDAP relay as the --add-dns-record <NAME> <IPADDR> option, so that a DNS name can be added from a black box perspective. Multiple strategies can be followed:

Regarding wpad, Kevin found that adding the record as NS instead of A to redirect queries to an attacker-controlled DNS server bypasses the GQBL. This still works in 2022 - more than 3 years later. A DNS server must be started on the attack machine for this technique. The nice thing about WPAD poisoning is that it generates authentications through HTTP, allowing them to be relayed to LDAP.

When everything else fails and obtainng an initial domain account through other means is not possible (e.g., if the domain has been hardened appropriately and all neighboring machines and users are non-privileged), this relay can be used to poison hosts beyond the local subnet, in the hope of reaching a privileged account this way and perform further attacks with higher privileges.

The output is the following, for instance when targeting the wpad name:

After waiting some time for application and replication across all domain controllers (180s by default), if a regular name was added, we should start getting NTLM responses on the rogue authentication servers, possibly from higher-privileged accounts outside of the local subnet. If the wpad name was added instead, we should start seeing in our rogue DNS server responses to DNS queries from DCs, generated because domain machines have booted up and started fetching WPAD configuration from DNS. For instance, in Responder:

A WPAD file must be served at /wpad.dat on port 80 of the attack machine, Responder and ntlmrelayx can do that with the appropriate options. Setting up a HTTP relay server on the port configured in the WPAD file will allow gathering new authentications to relay. In my observations, machines configured to disable proxy auto-discovery or configured with other sources of proxy will not authenticate to the relay server with logged-on users, but will still authenticate as the machine account a few times on boot: 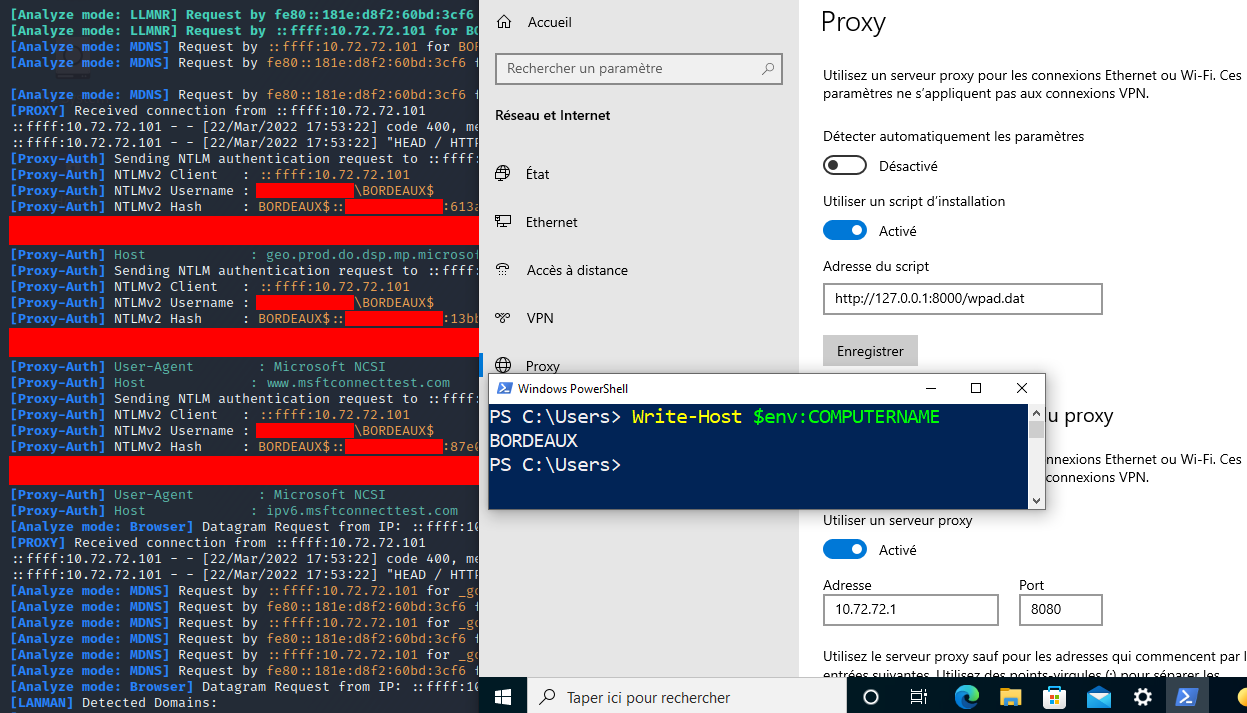 A word of warning: as explained in Kevin's articles and unlike for the previous relay, cleaning up DNS records should not be done simply by deleting the objects from LDAP, as doing so could leave the record to persist in the server's memory until reboot or DNS restart/reload. Instead, the object's dNSTombstoned attribute should be toggled from FALSE to TRUE, and its dnsRecord attribute should be set to an invalid value such as a single NULL byte. After application and replication across all DCs, the object can be safely deleted.

The LDAP relay sets a permissive ACL giving any authenticated account full control of the DNS record object, so that cleanup can be performed with any valid account, not just the originally relayed account that added it.

For individual relays, refer to the defense and mitigations mentioned in the original research. Lee's and Will's ADCS research is too extensive to TL;DR, but for the other 2 relays:

As for the broader issue of authentication relaying to LDAP/S, nothing new, require LDAP signature and LDAPS channel binding on all domain controllers.

Microsoft had initially planned to apply this configuration by default on domain controllers in March 2020 (there are still some sources mentioning this). However, this change was cancelled and the official documentation was updated to mention that “The March 10, 2020 and updates in the foreseeable future will not make changes to LDAP signing or LDAP channel binding policies or their registry equivalent on new or existing domain controllers”.

Thus, many organizations are still vulnerable to LDAP relay due to insecure defaults. While pushing these requirements as default could maybe generate breaking changes, it would help immensely in blocking this whole range of attacks, so let's hope Microsoft can find a smart way of doing this.