Authenticating with certificates when PKINIT is not supported

Here's what usually happens when we conduct an internal penetration test on an environment that has not been hardened against ADCS attacks:

However, I recently encountered an Active Directory environment where the last step (PKINIT) did not work.

TL;DR: Sometimes, Domain Controllers do not support PKINIT. This can be because their certificates do not have the Smart Card Logon EKU. However, several protocols — including LDAP — support Schannel, thus authentication through TLS. We created a small Proof-of-Concept tool, PassTheCert, that allows authenticating against an LDAP/S server to perform different attack actions.

PKINIT is a Kerberos mechanism that allows to use X.509 certificates as a pre-authentication method. It can be used to request a TGT, and even the NT hash of the account. There is already plenty of article on the subject, see:

Usually, when a PKI is deployed in an Active Directory environment, PKINIT is supported. However, during my assessment, I ran into the following error message when trying to use a (maliciously obtained) Domain Controller certificate:

Here's what this error message looks like in Wireshark:

Searching for the error message, one quickly finds Microsoft's documentation on the subject:

A certificate can have several Extended Key Usages (EKUs). If a KDC must support smart card logon, its certificate must have the Smart Card Logon EKU. A failing PKINIT may be an indication that your targeted KDCs do not have certificates with the necessary EKU.

Going back to the fundamentals

With no clear way to use my stolen certificate, I went back to "Certified Pre-Owned", thinking there must be a section explaining how can one authenticate using a certificate without relying on Kerberos.

The interesting information is in the "Active Directory Authentication with Certificates" section (emphasis mine):

During our research, we also found that some protocols use Schannel — the security package backing SSL/TLS — to authenticate domain users. LDAPS is a commonly enabled use case. For example, the following screenshot shows the PowerShell script Get-LdapCurrentUser authenticating to LDAPS using a certificate for authentication and performing an LDAP whoami to see what account authenticated[.]

Indeed, you can use SSL/TLS to authenticate to a Domain Controller. Here's the relevant Microsoft documentation (again, emphasis mine):

Great, it works! This means that we can authenticate to the LDAP service. We now have a way to use our malicious DC certificate. However there seems to be no offensive tools that support authentication with TLS certificates.

So I created PassTheCert, a simple C# tool that can authenticate to an LDAP server using a client certificate, and perform actions that are interesting for an attacker. Unlike most other offensive tools, it has the added bonus of working in environments where LDAP Channel Binding is enabled, because Schannel authentication is, by design, not subject to Channel Binding.

Since we're connecting to LDAP, our privilege escalation methods are limited. Right now, only four attack vectors are implemented:

You can find the code here, along with a Python version implemented by @lowercase_drm. Note for Googlers: this tool extends the notion of Pass the Certificate, thus dubbed by @_nwodtuhs in his Twitter thread on AD CS and PKINIT.

Now, let's say you're in a situation similar to my own: you have the certificate to a Domain Controller but there's no PKINIT. You can start by creating a new computer in the domain:

Now that you have a computer you control, defined with SPNs and all, you can add its SID to your Domain Controller's msDS-AllowedToActOnBehalfOfOtherIdentity attribute:

Now that it's done, you can go back to your trusty impacket to perform an RBCD attack, and impersonate the domain administrator on your DC:

Here's what the attack looks like with the Python version of the tool:

Authenticating via Schannel generates two events with ID 4648 and 4624, just like any authentication mechanism. We can see that the logon process is Schannel. The authentication is set to Kerberos, which seems to corroborate the white paper to "Certified Pre-Owned" (page 32): 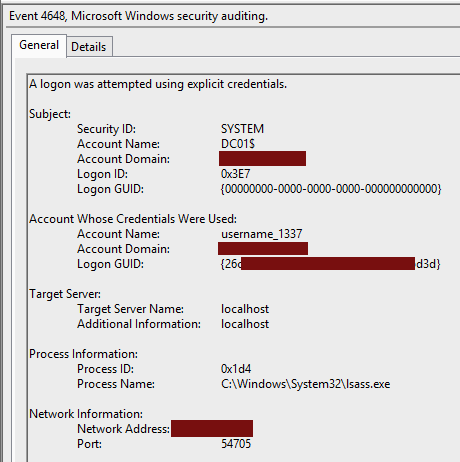 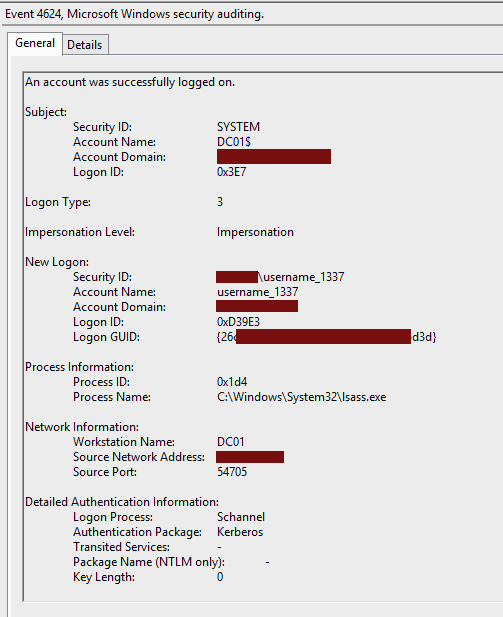 PassTheCert is open source so feel free to expand upon it. For now, it's a very simple tool, and mainly functions as a Proof-of-Concept. It only supports the LDAP/S protocols and only the bare minimum actions have been implemented. As reminded by the white paper to "Certified Pre-Owned" (page 32, again), other protocols support Schannel authentication but do not seem to do so out-of-the-box. Still, it would be great to be able to use a certificate obtained via ESC8 to authenticate via RDP.

We're also looking at implementing certificate authentication in pywerview, which would allow more actions on an LDAP server (reading gMSA's passwords, for example).

However, implementing certificate authentication in impacket, while not an easy feat, would be a great addition to our offensive toolkit.

Finally, if you read the excerpt of Microsoft's documentation regarding SSL/TLS connection to a DC, you may have seen that we can authenticate via TLS in two different ways:

PassTheCert supports both ways, which allows to use it on TCP/389 if TCP/636 is closed.

This was the entry point to @lowercase_drm's research on bypassing LDAP Channel Binding through StartTLS, showing once again that digging into a subjet can lead to unexpected findings.